Have you ever visited a Brazilian steakhouse before? If you haven’t, envision sitting at a table while several servers walk around you with slabs of piping hot meat – marbled sirloin, ribeye, leg of lamb, pork, sausage, chicken wrapped in bacon, you name it – and knives poised to slice off as much as you want to eat. It’s literally a meat lover’s paradise, and if it sounds appealing to you, read on to learn where you can find this kind of experience in the great state of Pennsylvania.

Note that the below recommendations are in no particular order.

Sometimes bigger isn’t better. That’s the case with Picanha Brazilian Steakhouse, located in bustling Center City in the heart of Philadelphia. Known for its small, intimate, and “beautiful” space, Picanha (which means ‘top sirloin’) provides attentive and friendly service by accommodating and “intuitive” waiters who pay close attention to the needs of their diners. The atmosphere is relaxed and comfortable.

If you’re in search of an avalanche of “outrageously good food,” look no further than NaBrasa Brazilian Steakhouse in Horsham. The meal starts with the salad bar and appetizers on the table, but some words of wisdom: don’t fill up or overdo it here because the best is still to come.

NaBrasa gives its customers a card that they can flip between green and red – flip that card to green and it’s on! Multiple servers will quickly surround your table, ready to offer you hot, juicy, and flavor-filled cuts of a variety of meats like filet wrapped in bacon, leg of lamb and lamb chops, top sirloin, chicken parmesan, sausage, salmon smothered in sauce, ribeye, and more. And when you’re done eating tons of meat and delicious sides (in other words, when you’re “meat drunk,” as one reviewer says), it’s time to move on to “the best desserts you’ve ever had” – if you have any room left for them!

NaBrasa Brazilian Steakhouse is THE place to go for rodizio-style food in Horsham, that’s for sure. (Trust me, I’ve gone before and it’s really great.) Definitely go check it out!

“All you can eat from a selection of 13 delicious cuts of meat” – how does that sound to you? If you’re intrigued, you should stop by Ipanema Grille the next time you’re in Scranton. Not only does the restaurant offer “fantastic meat” and “an endless buffet salad bar with lots of sides and cheeses,” but it’s also reputed to provide “superb service” in a beautiful setting. Can’t beat that!

Reviewers simply rave about Ipanema’s “out of this world” cuts, particularly its lamb, steaks, pork, bacon, and sirloin. They also love the “dirt cheap” sangria. It really doesn’t sound like any of us could go wrong visiting Ipanema Grille in Scranton; maybe I’ll see you there! 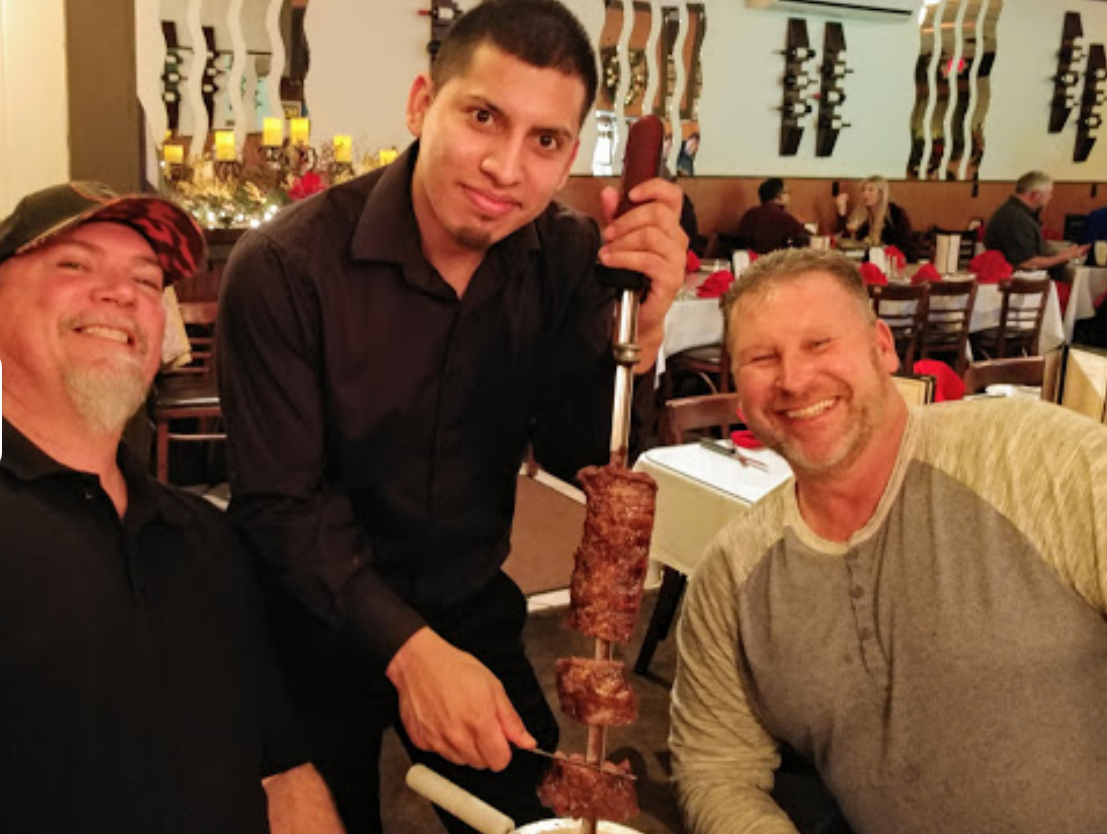 If you’re a fan of meat but also in the mood for fun alcoholic drinks and a mix of Latin American cuisine, then Paladar Latin Kitchen & Rum Bar in King of Prussia is right up your alley. From its Brazilian baby back ribs to its Brazilian red sangria (cabernet sauvignon, Sao Paulo cachaca, blackberry brandy, and fresh juices, yum), Paladar has lots of authentic dishes and beverages to choose from in addition to Latin comfort food, seafood, tacos, and more – needless to say, the restaurant offers an eclectic selection of food that customers love.

The service at Paladar is fast and friendly, and there’s plenty of rum to go around (English, Spanish, French…) So the next time you’re in King of Prussia and feel like getting a little buzzed (on both the amazing food and drinks), try out Paladar Latin Kitchen & Rum Bar – you won’t be disappointed!

A meat lover’s paradise… but also a favorite of vegetarians? Is it possible? Why, yes, it is! Broncos Brazilian Steakhouse in Philadelphia satisfies no matter what your preference. Turn your green tag over and the meat will keep coming. And/or visit the salad bar and enjoy your choice of rice, beans, yucca, plantains, salads, and so much more.

Repeat customers recommend skipping breakfast and lunch so you have more room to gorge on the tasty, authentic Brazilian barbeque. Pay for all-you-can-eat or by weight and enjoy outstanding service too. So grab a bottle of your favorite alcoholic beverage (it’s BYOB) and bring your appetite to Broncos Brazilian Steakhouse as soon as you can!

Taco Tuesday – Tacos of Toronto, ON

10 Pizza Restaurants in Toronto You Must Try