It?s a truth universally acknowledged that road-trips require restroom breaks, the occasional gas tank fill-up, and pit stops for lunch. Perhaps not universally acknowledged, but none the less true, is that there are better alternatives than the usual suspects of fast food that litter our highways. On a road-trip from West Connecticut to Lake Champlain, I decided to stop into Albany to quest for some ?real food? - and on the recommendation of my brother-in-law, I took my family to the Iron Gate Cafe. He claimed that it was the number one lunch spot in the city, and on that promise I tolerated the 45 minute wait for a table that would inevitably eat away at the arrival time of my final destination. Bobbing and weaving through the outdoor seating area at the front of the building, and through several inside dining rooms, we were seated in an outside dining space that seemed to have once been a rear garden. I ordered a BLT, a simplified version of what was offered on the menu, and an iced coffee. Other members of my family ordered similar items, variations of BLTs and sandwiches, indulging in sourdough breads and multi-grains, except for my father-in-law who had ordered a slice of cornbread with eggs. Upon arrival, I had the rare and pleasantly embarrassing sensation of a mouth watering. Everything had arrived perfectly for all of us, except for a small mix-up of bread types on one sandwich. The flavors were perfectly simple, balanced, and complementary. The finish was light on the stomach, energizing rather than making me feel sluggish and sleepy. The homefries were a highlight of the dish for me, having the perfect saltiness, a crispy texture of the outside, and the much-coveted softness of the inside. The servers were fast, despite being clearly faced with the logistical challenge of navigating the layout of what appeared to be an old home with an almost Victorian layout. One of the only downsides to the restaurant is that there are fewer, and smaller, restrooms than seem to be appropriate for the number of guests and the apparent popularity of the Iron Gate Cafe. Naturally, this is a limitation of the layout of the structure and equally part of the charming character of the place. It seems that the rotation of customers seems to help prevent lines (that would encroach upon other?s dining areas), but when several people in my party tried to use the restroom as we were leaving, it became easily congested. Overall, the Iron Gate Cafe made for a perfect sojourn into the state capital for me and well-deserves it?s number one spot for places to eat in Albany.

Delicious food; lots of variety on their menu whether you're looking for breakfast or lunch, and with high-quality ingredients you can't really go wrong no matter what you pick. The bacon on the sandwiches was crispy. Real maple syrup was served with the french toast. Service was good and organized even though it was busy, but I wouldn't eat here if I was short on time. Would visit again.

This is an amazing way to start the day with a classic but Delicious breakfast dishes Extremely WELL DONE at the bar with a very nice guy Bryan he?s very efficient and cool!!! We love the iced Americano. This place is so cute and all the girls with a beautiful smile in theirs faces!

This ia very popular brunch place. We called 2 hours before we arrived for reservation and still wait for 30 minutes to be sit in. The waiters are all very friendly and helpful. The services were also prompt... Food portion was also generous and delicious.... If you are willing to wait, this is definitely a good choice for breakfast, lunch, and brunch....

Great Atmosphere and Awesome Food I first visited the Iron Gate Cafe in October with my realtor so I was quick to suggest it to my husband as we were considering a local restaurant for lunch. The Iron Gate offers quality food and great service in a unique and comfortable setting. They still had covid safety measures in place as staff, for the most part, wore masks over their noses and offered a scannable QR code menu; physical menus available upon request. For this visit, we ordered the Kickin' Chicken and Chicken Club sandwiches which both came with fries. Our server suggested subbing fried chicken on the Club which was a good suggestion. You'll see in the pictures, the chicken breasts had a beautiful brown, crispy crust and were still tender and juicy. Their fries, while light on seasoning, appear to be double fried them giving them a wonderfully crisp crunch and soft center. Our server was helpful in answering our questions and providing suggestions. She was extremely pleasant and helpful, checking in on us a couple of times during the course of our meal. The restaurant itself has a wonderful atmosphere about it as the majority of the indoor dining spaces are in various rooms on the first floor of an old brownstone home. There is a small dining room in the back which isn't quite as impressive so try to get seated in the house. The outdoor dining spaces look inviting as well so I'm looking forward to warmer weather. They have a nice selection of vegan and vegetarian options as well as a nice looking breakfast/brunch menu. ATMOSPHERE - 5 (3 if in the backroom) FOOD - 5 SERVICE - 5 VALUE - 5

Why did it take me so long to come here!?! in search of meatless breakfast options I came across Iron Gates menu, and the amount of options to pick from is very impressive! For my first order I got the Ultimate Vegan Sandwich that came with homefries, corn bread for later, and their iced coffee. The coffee is flavorful and smooth - definitely a nice pick-me-up for the morning. Now, that sandwich....It's going to be difficult for me to try out the rest of their menu because I want to keep ordering it!! From the first bite all the components came together in a way that told me that I was going to enjoy my meal, and since it's a pretty hefty portion I knew I'd be satisfied by the end of it - which was true to the last bite. I'm very happy that I'm exploring the food around me because it brings instant favorites to my attention, like Iron Gates Cafe has just become! I know I'll be back soon!!

As much as I'd like to believe all the 5 star hype, I'm glad to say I am in good company with other Yelp Elites. I've heard about this place for a while. Shamed to admit it is my first time eating here, since I moved to Albany, especially when it is just a few minutes walk from my home. Well, after being away from Albany for almost two months indulging in all the great grub in Austin, TX, I had a hankering for some decent breakfast on a Sunday morning coming down. Now, in my defense, I've driven by many mornings and saw the line out the door. That always deters me, since I have no patience for waiting, at least for breakfast. Today, though, I figured why not, especially since it was 8:40am and the place doesn't open until 9am. Got there around 8:50am, gate was closed, and the lady getting ready for the Sunday morning breakfast stampede was nice enough to yell, "We open in 10 minutes!" "Cool," I thought as I just stood there wondering what to do for 10 minutes, without taking my phone out and sending useless texts to others, just because. Well, I did anyways. "Guess where I am going?" I said to one friend. "Where?" my friend promptly replied on Sunday morning. That seemed odd. "I'm getting ready to have some breakfast at Iron Gate," I replied. Silence for a little bit, and then I was immediately un-friended, to only be re-friended minutes later just so he could complain about not being invited and then rant and rave about how it is the most awesome breakfast place in the world. "We shall see," I thought. Well, I have to admit the hash-browns and my eggs were great. I got the Elvis special only because I remember reading about it on guess where? -- YELP! It was all that it was cracked up to be and I got a side of their famous Hollandaise sauce, which I recommend doing, if it doesn't come with your order. It is that good. On to the disappointment, the corn bread. What can I say other than dry, tasteless and not corny at all. Tasted almost like something you make from instant corn bread mix you buy at the grocery store, but I could be wrong. To be fair, I did just come from months in the south, where corn bread is king, and tastes oh so good. Soft, moist, buttery, with a nice crust, and sometimes jalapenos to boot. So, this stuff just didn't cut it for me. Same goes with the pancake side that I ordered. I mean it was tasty and good, but not five star good. You want to know what 5 star pancake good is? Look up Kirby Lane Austin, TX. I have to agree with one other Yelper elite. Maybe I just ordered wrong. I will go back and try some other dishes. Some of the dishes looked much yummier than mine, especially the toast. Either way, it was still enjoyable and I look forward to trying it again, maybe without my Austin TX, food vibe goggles on.

Was recommended this place from an AirBNB host. Nice, clean little bar just a few minutes walk from where I was staying. The Hostess that took my reservation over the phone and met in person when I checked in was super friendly and welcoming, she did awesome. Our waiter Christopher was attentive and polite. Food was delicious and service was quick and seamless. Thank you all for great night out.

Looking to try something new? Come to Iron Gate Cafe in Albany where you can try american food like our exquisite salads. We aim to make you have the most friendly experience while at our restaurant. You can call us at (518) 445-3555 to ask any questions.

Explore restaurants in Albany
Sirved has 294 restaurant menus for Albany, New York. Want a specific cuisine? Check out our best lists for Mexican, Asian or Italian in Albany. Dietary need? Let us show you all the vegetarian, vegan or gluten free options. Search Sirved for things like salad 🥗, tacos 🌮, pizza 🍕, burgers 🍔 and more. Need just a kids menu or drink menu? Sirved categorizes our menus to make exploring easier.

Iron Gate Cafe menu has been digitised by Sirved. The menu for Iron Gate Cafe may have changed since the last user update. Sirved does not guarantee prices or the availability of menu items. Customers are free to download these images, but not use these digital files (watermarked by the Sirved logo) for any commercial purpose, without prior written permission of Sirved. 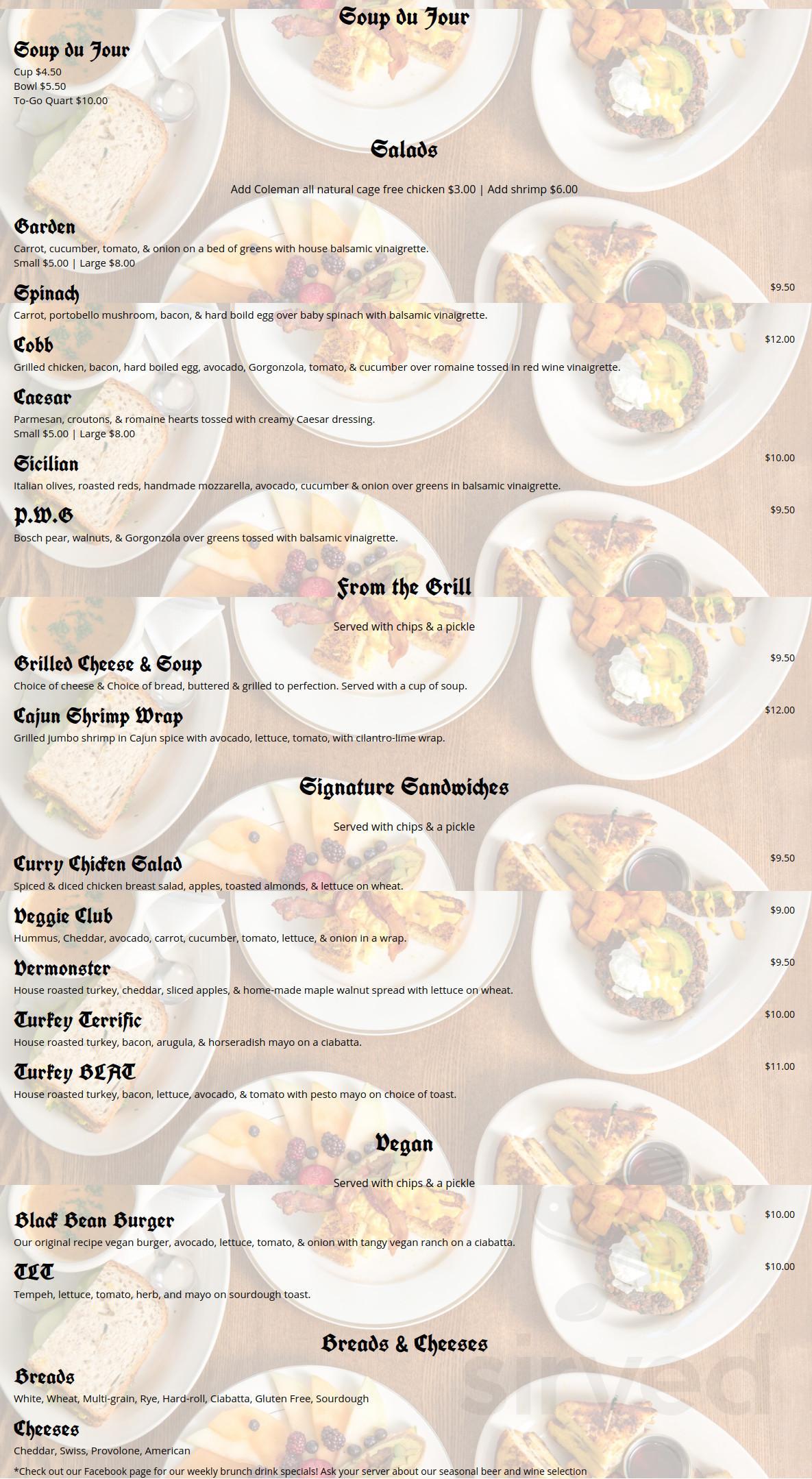 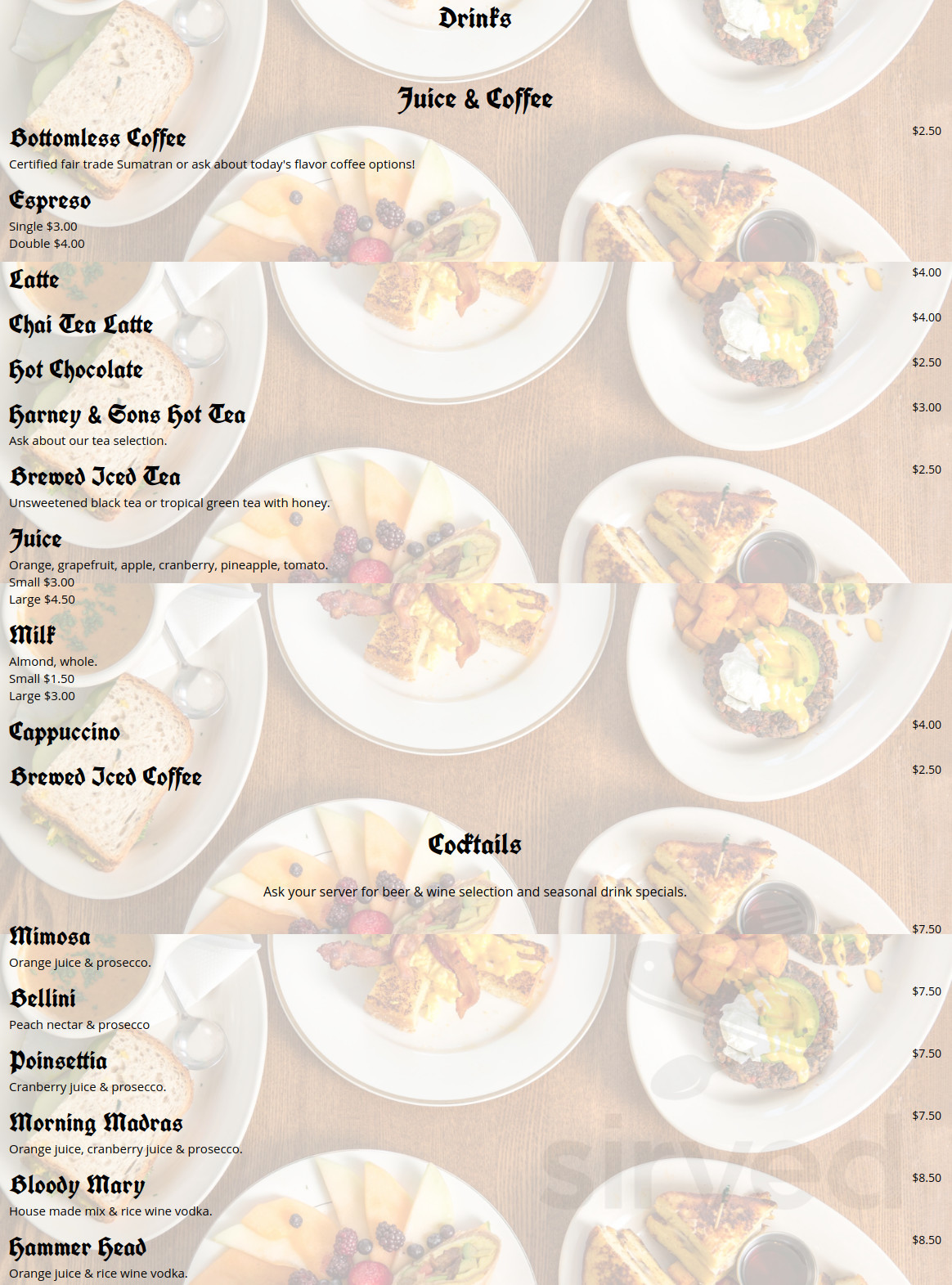 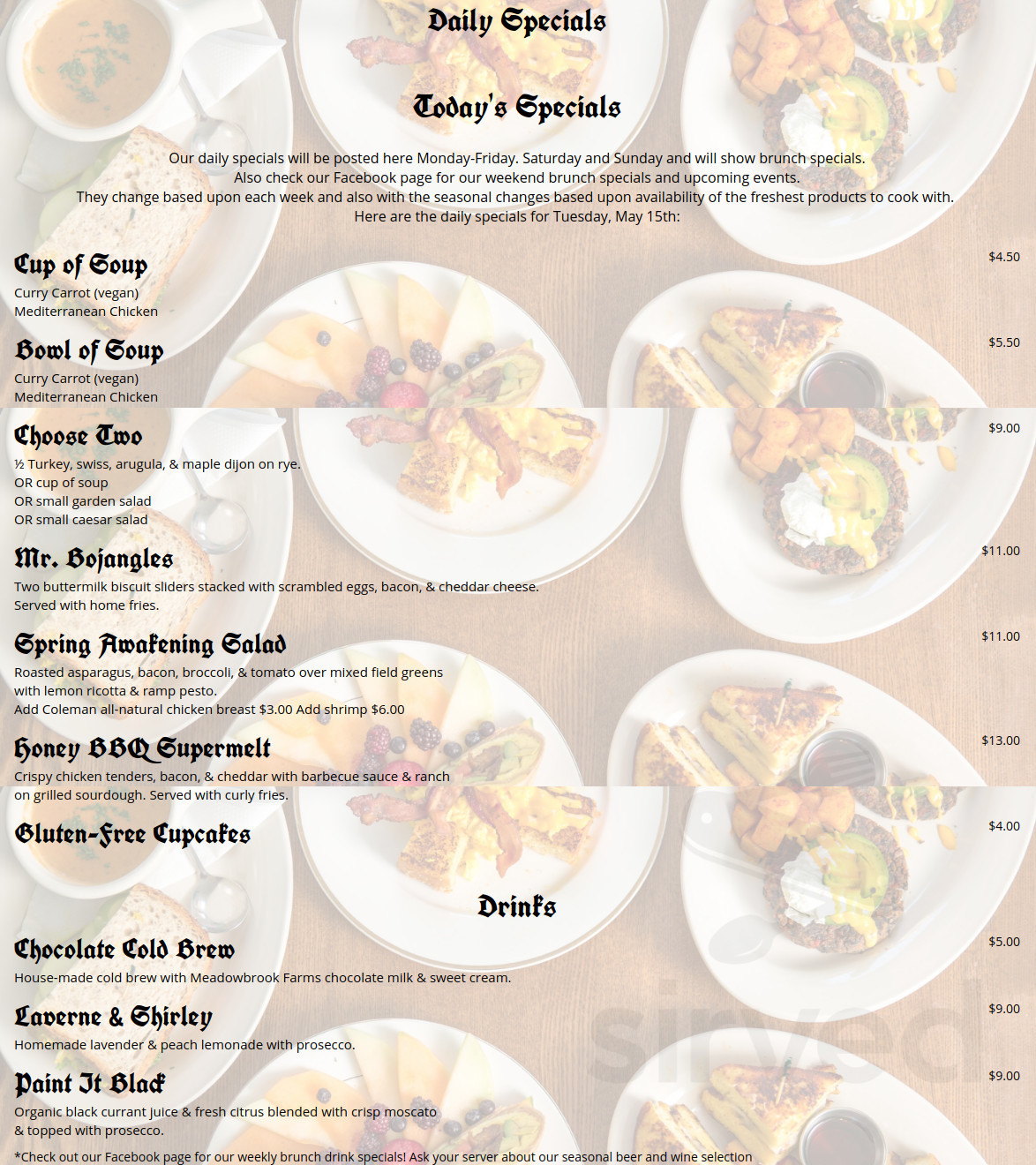 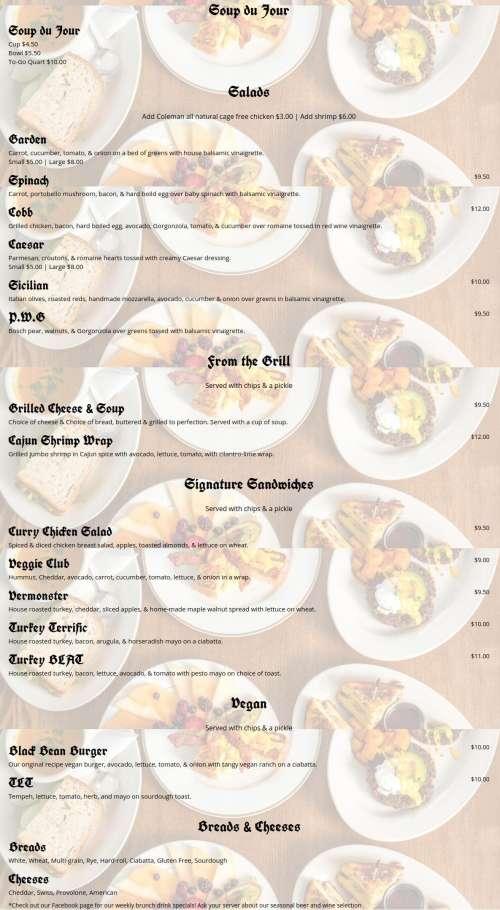 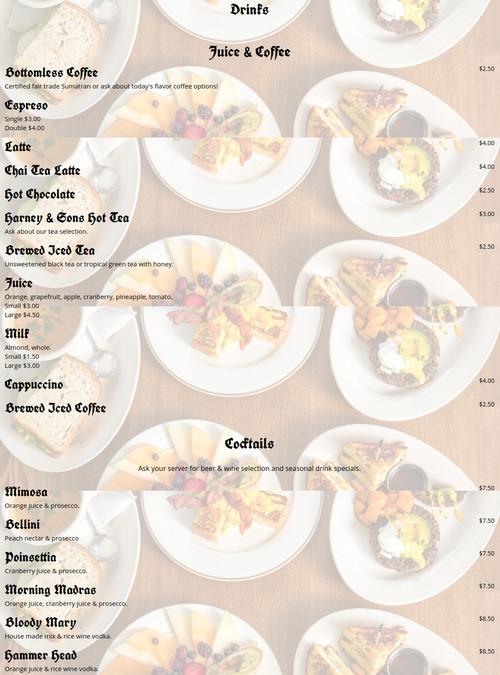 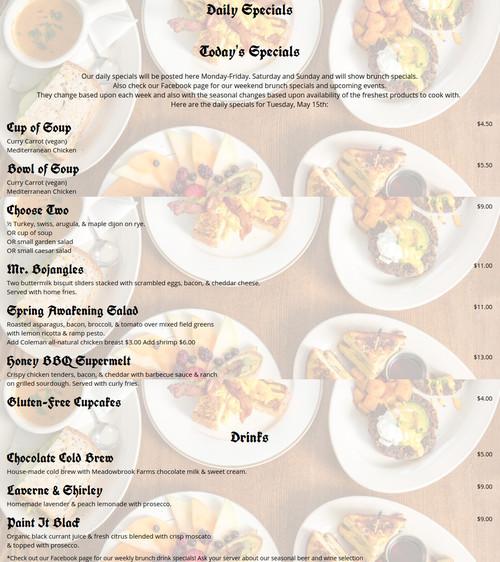