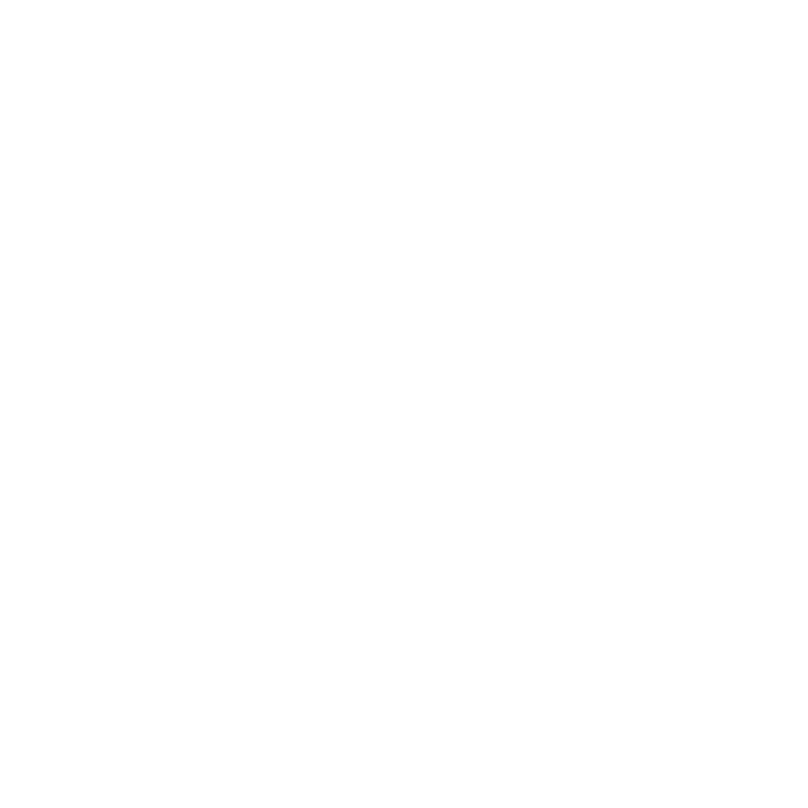 We went for snacks on the weekend and sat out on the patio. It was a beautiful day and it was pretty busy for lunch service. We ordered guac and chips, fries and bruschetta. Everything was served hot and tasted incredible. Btw the bruschetta is out of this world! Our server Joshua was really friendly and recommended some tasty alcohol free drinks for us. He always had a smile on his face and made us feel welcomed!

Upon entering the restaurant, hostess? were inviting and very friendly. Waitress was personable, quick and very helpful with the Rewards App! We ordered the guacamole to start (highly recommend btw) . Mother in law ordered 2 lbs of honey garlic wings and LOVED them.. my husband ordered the chipotle bacon cheddar burger with fries (he mentioned it was quite tasty) and myself, the Thai sesame stir fry bowl - exceptional!! Thank you so much for adding a plant based menu - much appreciated! Will definitely return :)

I love Jack's, from the first day its opened. One of my favorite humans, Rosa is the manager and she rocks her tiara. Hands down. Friday nights we learned that DJ.Lynz is their house DJ., wow!!!! She is a fantastic artist. Young, but WOW!does she know about the ole skool jams. Check her out, so worth a night out without the hectic club crowd. Makes for a #girlnightout #boysntunesnight #1fan Jack's happy customer.

We arrived at 7:30 pm. It was busy and we had to wait for 20 minutes to order. The waiter Hassan was friendly and applogized for the delay, that's why we didn't leave. We ordered asiago chicken bow tie, big jack burger, garlic breand and brownie and beer. Would recommend this place for its good atmosphere and deliciousfood.

I went for dinner with a few friends. I had the salmon bowl which was very tasty and I very much enjoyed. We all shared the nachos, again delicious ? My one friend had the chicken parmesan and said it was dry. The fish and chips was done well and the smoked bacon double burger was excellent according to my friend. I had a unicorn bellini which was lovely and cute. The only thing lacking was the service, it was slow and very inattentive. We didn't get offered refills, and the waitress took away the nacho plate before we were finished with it. She didn't even ask if we were done. While there were other plates that could have been taken away to help clear the table. I asked for 1 take away container and she brought 3 which is very wasteful because they can't be given en to another customer. Overall we were disappointed with the service. This is very important to me when I'm dinning out, as it's not just the food that matters. That's why I gave the 2 star. Don't touch my nachos ? ? ?

UPDATE - No reply from this location or the head office about this. Poor customer service via the lack of a response makes it lose another star. The location was clean, Cass, our server was very sweet and polite, and the food was delivered quickly. The lack of two stars does not go to the location, itself, but to the Head Office because of their (lazy) error with the misrepresentation of a menu item. During the pandemic, I have been to a restaurant once. After a Holiday Celebration with my family of going to the movies (again, since the pandemic began in early 2020, we have not done this), we decided to ride the wave of enjoyment by stopping at Jack Astor's for dinner. My daughter and I were excited for the calamari - we've been craving it for ages, and prefer it fresh-fried instead of soggy from takeout. It appeared on the menu, both the online version and the print (which is a black and white photocopy on a piece of white copy paper). We placed the order and were told that, unfortunately, they no longer serve calamari due to supplier issues. This began a while ago, so I questioned why it was still on the menu. Cass said she didn't know, that it was not a location concern (her manager knew of the issue), but a Head Office decision. It ruined my night. This may seem like a small issue to some readers, but as an individual with a cognitive disability, that disappointment was very upsetting. It deflated the good feelings I'd had and forced me and my daughter to eat something less appealing (I had the guacamole and found bizarre bits of something in it that no one could identify...). Why didn't we leave? Because we were there, we were hungry and my partner was intent on eating a steak. The hassle of leaving, finding another restaurant or the option of having fast food was undesirable. There were few other dietary options for me, but I chose the guacamole because I hadn't eaten for hours. It was average. I was very disappointed, especially because this supplier issue (they went out of business earlier in the pandemic) was well-known to the Company and, really, how hard is it to modify the menu and remove that option from a photocopied piece of paper? It's just the responsible thing to do. Also, from a consumer rights perspective (Ontario), offering something that you know is not available is considered Misrepresentation : "It?s illegal for the business or individual to give you false information about themselves or the product or service they offer. Some examples of misrepresentation include: ... promising to deliver a service or product when they know or should know that it?s not possible." Again, the location and staff were fine, but I would be uncomfortable patronizing any Jack's restaurant again after this; if they're willing to falsely represent themselves in this manner, what are they doing with our food?

Our server Cass was wonderful, very kind, smiles all the way. Food was also excellent, especially the lobster and crab dip. We will definitely come back.

Overall experience was good. Coming in you need to show proof of vaccine obviously, also scan the QR code to answer series of questions for Covid. Waitress was super nice and took good care of us. She made sure cups were full. We ordered the nachos and couple drinks, everything came fast and was a great way to close off the weekend.

At Jack Astor's Bar & Grill we offer canadian food for any occasion. Some consider our coffee the best in Pickering and we want you to try it.Locate our specialties of the week. Give us a call at (905) 839-2226 and we'll be waiting for you when you arrive.

Explore restaurants in Pickering
Sirved has 152 restaurant menus for Pickering, Ontario. Want a specific cuisine? Check out our best lists for Italian, Asian or Mexican in Pickering. Dietary need? Let us show you all the vegan, gluten free or vegetarian options. Search Sirved for things like steak , burgers 🍔, pizza 🍕, tacos 🌮 and more. Need just a kids menu or drink menu? Sirved categorizes our menus to make exploring easier.

Jack Astor's Bar & Grill Pickering menu has been digitised by Sirved. The menu for Jack Astor's Bar & Grill Pickering may have changed since the last user update. Sirved does not guarantee prices or the availability of menu items. Customers are free to download these images, but not use these digital files (watermarked by the Sirved logo) for any commercial purpose, without prior written permission of Sirved. 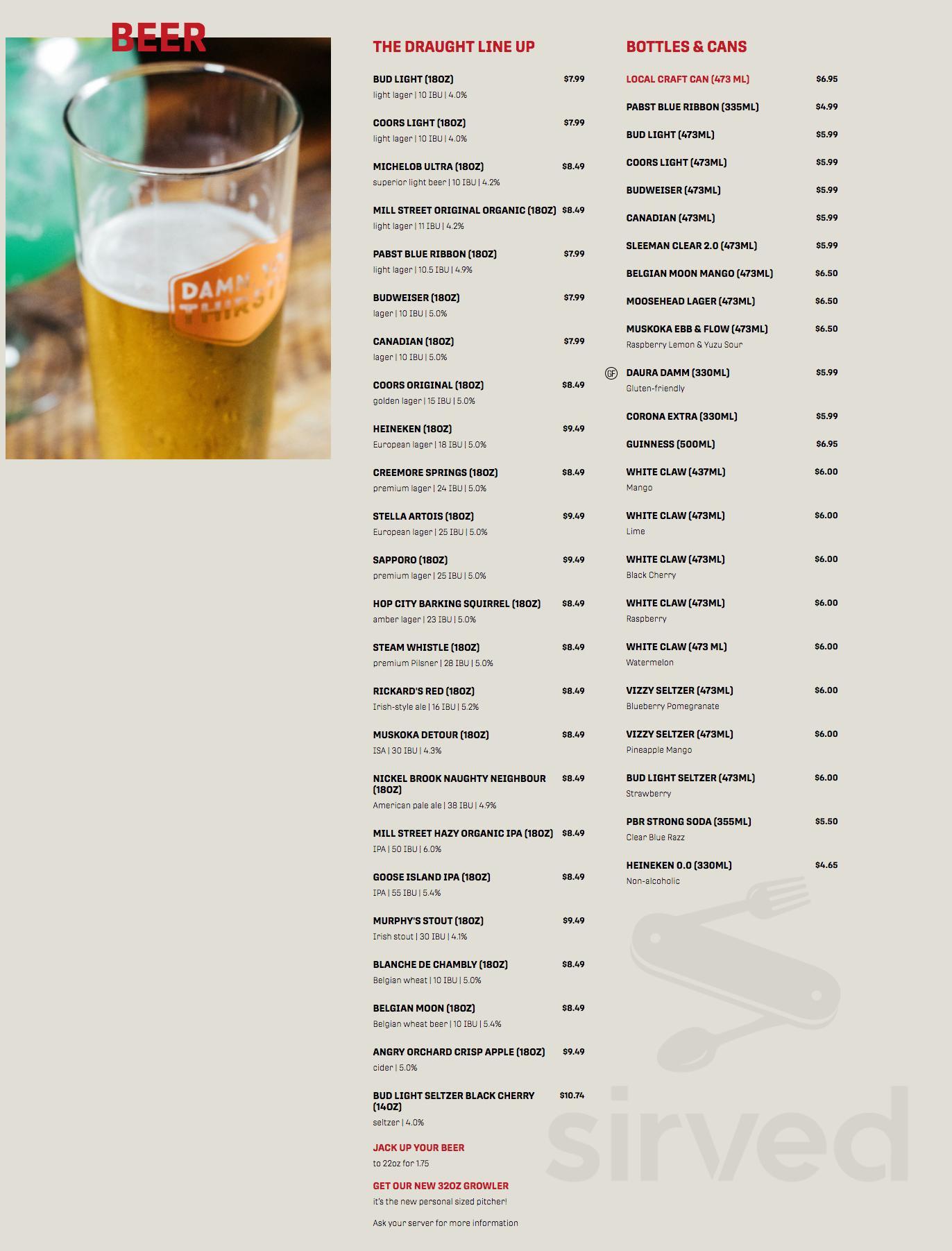 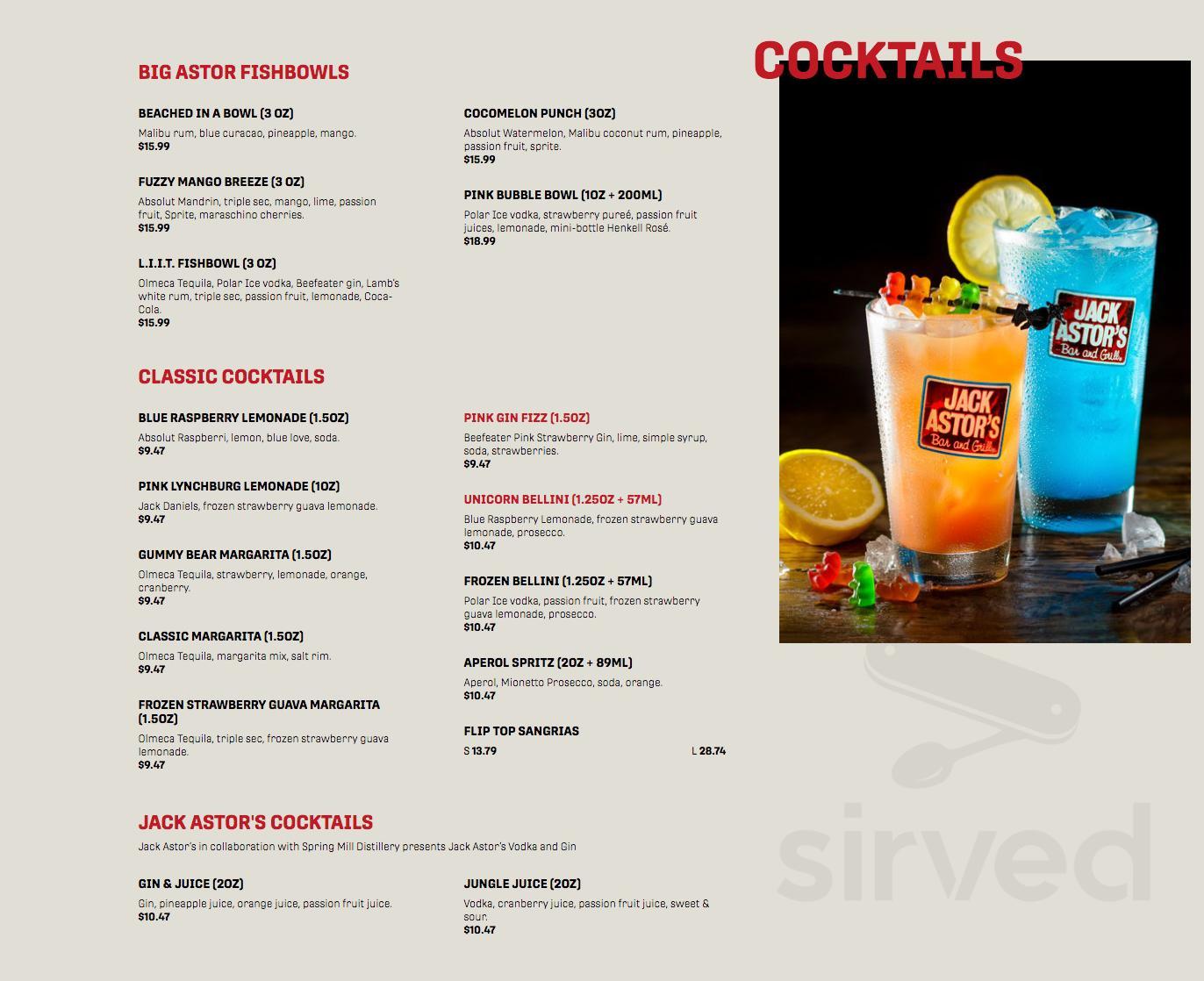 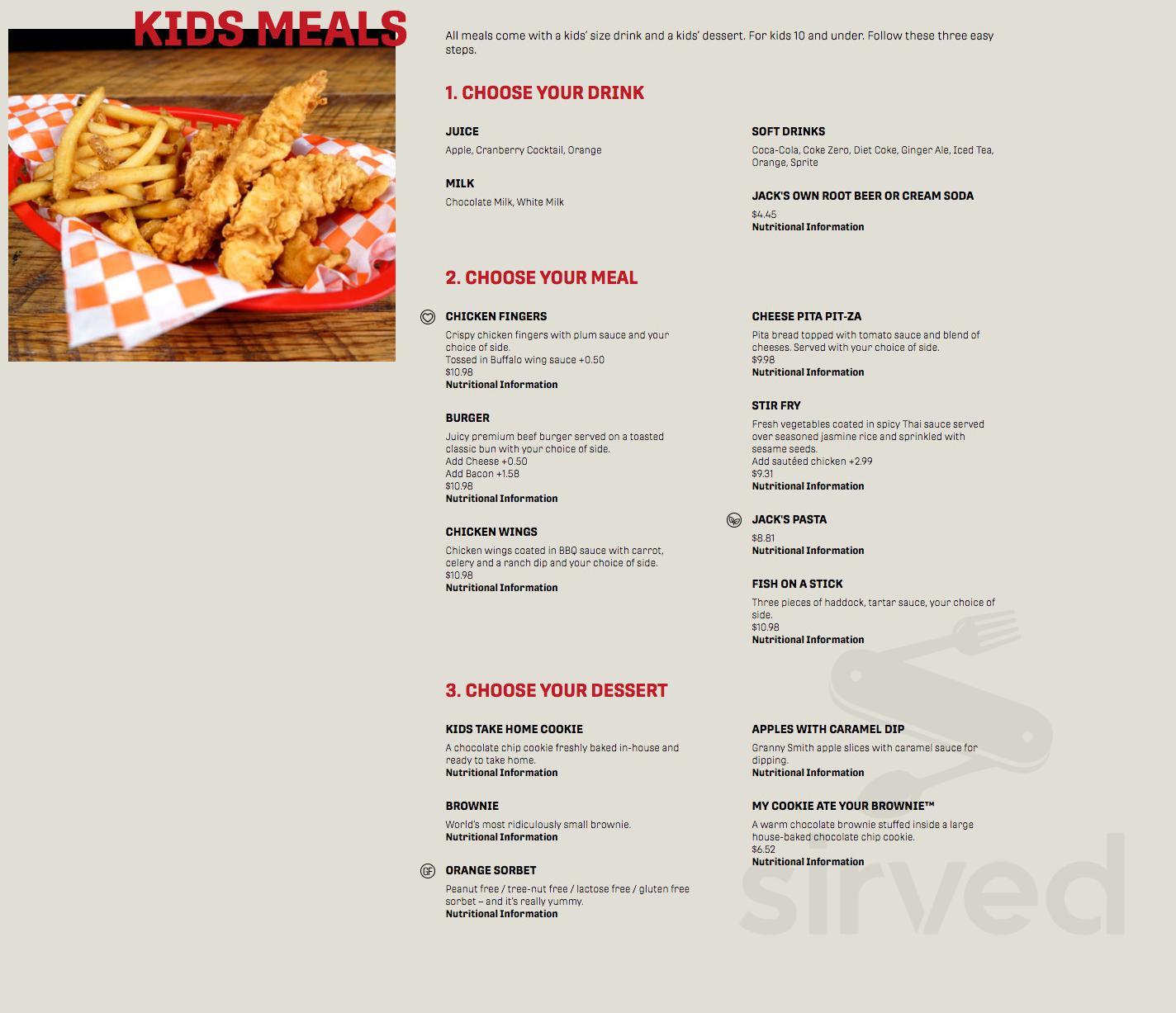 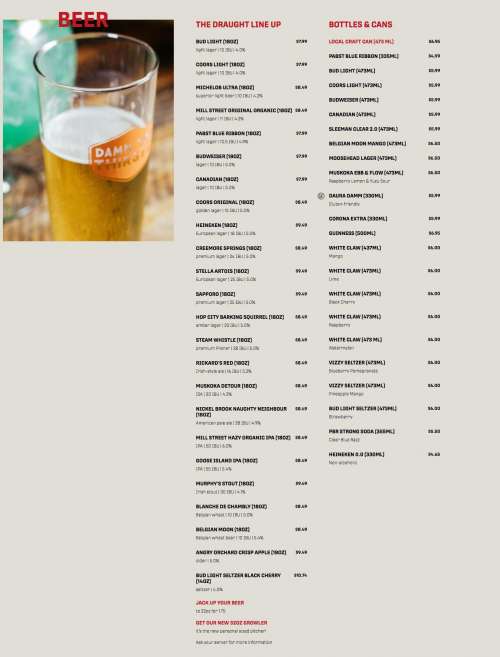 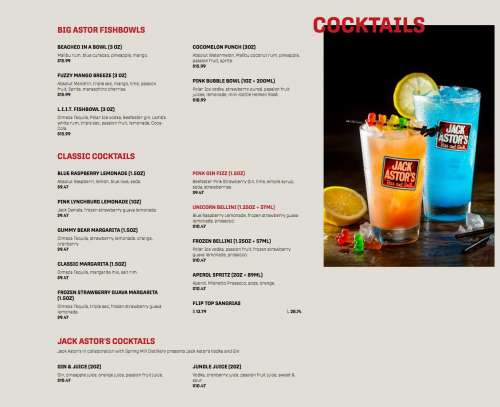 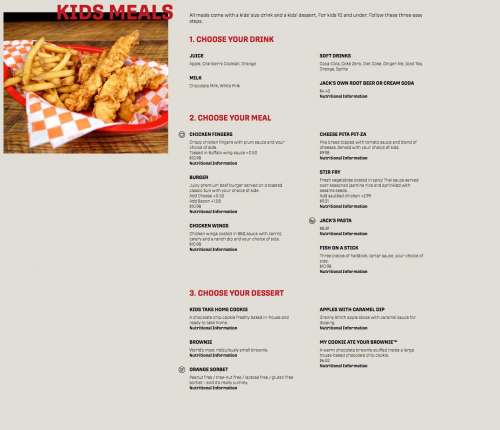 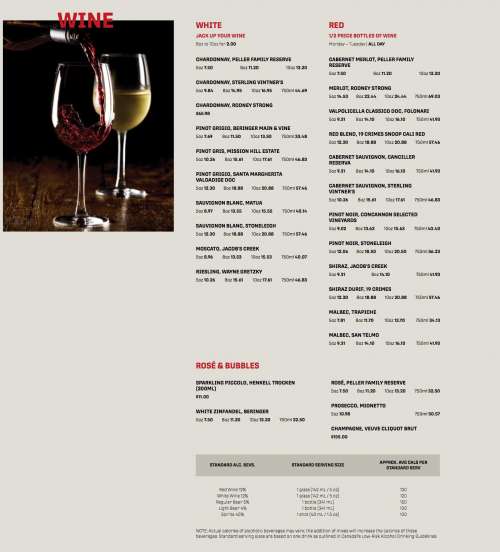