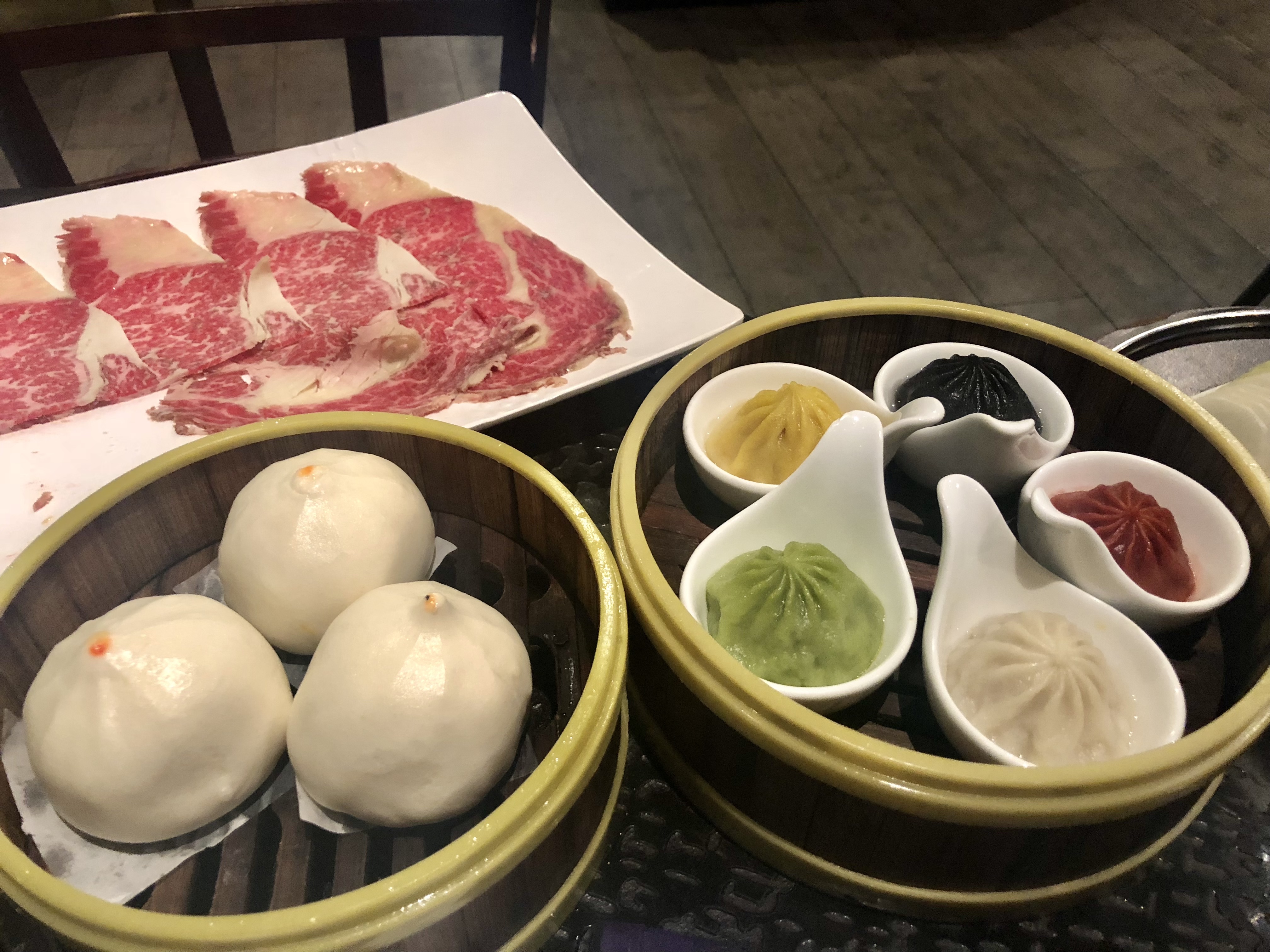 Dim sum is a type of Chinese cuisine traditionally brought out in small dishes on a cart. It is typically enjoyed during lunch, or for brunch, but in some U.S. cities it can be found later in the day as well. Most modern dim sum dishes originated in China, but have been changed slightly, however, the dim sum at Dragon Beaux stays pretty traditional. 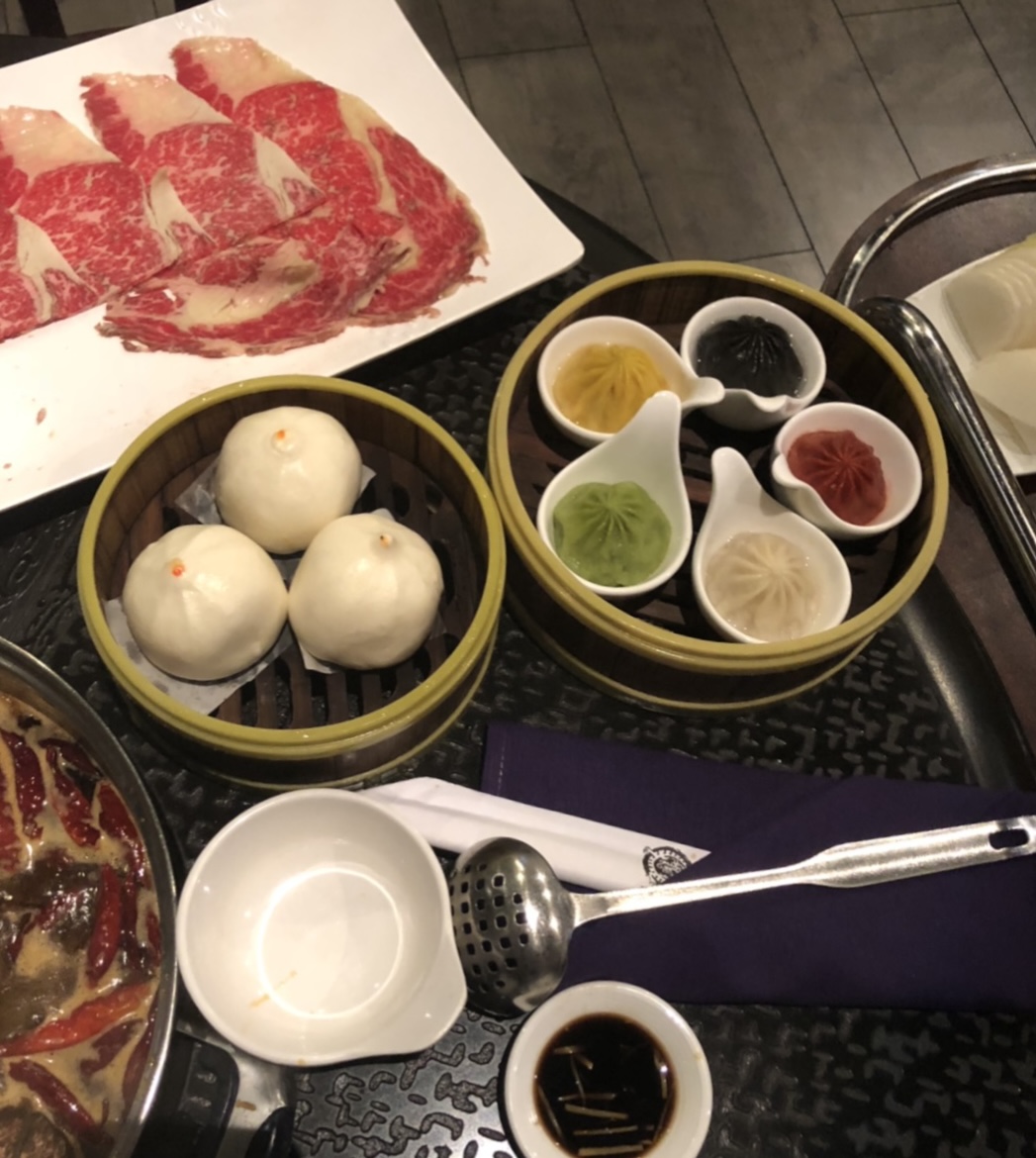 One thing about Dragon Beaux is that they also offer hot pot which is nice if you want to mix it up. I have visited a few times, but the first time I chose to have hot pot with a side of dim sum, and the next few times I only ordered dim sum.

The best dim sum dish at Dragon Beaux is the “Five guys xiao long bao”. Xiao long bao is soup dumplings, and they have soup inside of them that explodes when you bite into them. Traditionally you are supposed to poke a hole, then drink the soup, and finally eat the dumpling. 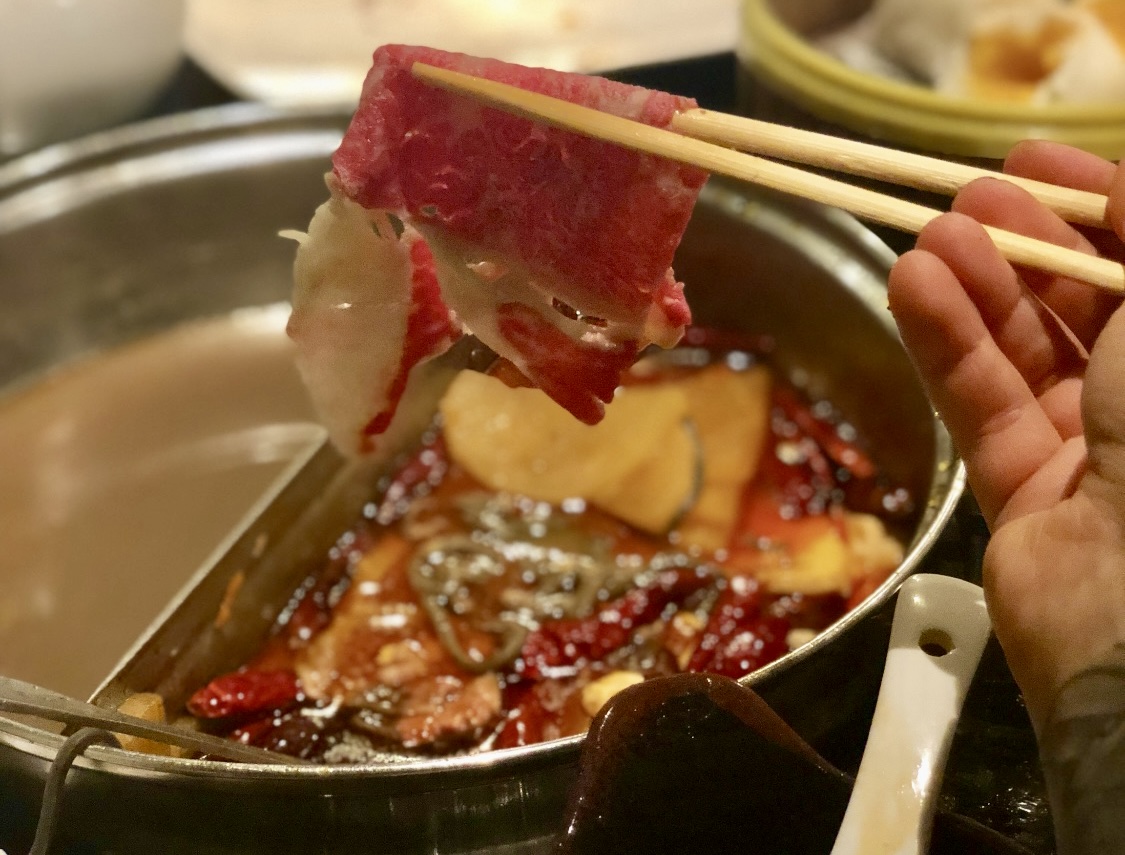 It is important to be careful with soup dumplings because the soup is hot and can definitely burn you! The five flavors include original (made with pork, so I did not eat this one), spinach skin and kale inside with a veggie broth, squid ink skin with a truffle inside and broth, turmeric skin with crab row and seafood broth, then finally one made with beet flavored skin and beef broth. Traditional xiao long bao is good, but having these different flavors is amazing. 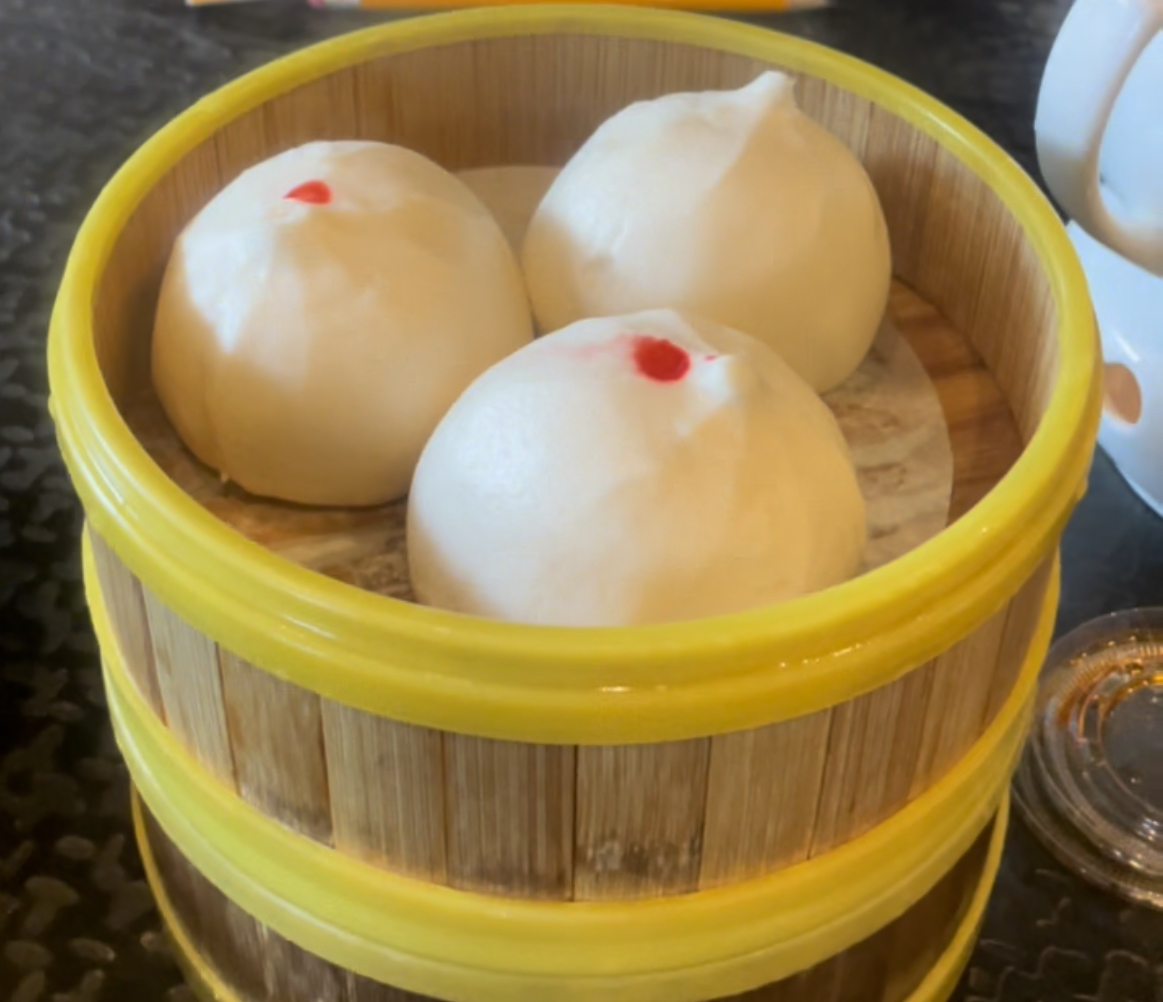 I also highly recommend trying baos. These are doughy dumplings that have something inside. There are savory baos like a pan-seared black pepper wagyu beef bao or a pan-seared almond kung pao chicken bao.  However, I prefer the desert baos such as taro (also known as ube, a purple yam), or durian which is a stinky fruit prized in Asia. They are savory and a bit sweet. I secretly dunk them in soy sauce but I am not sure that is how you are supposed to eat them.

• Salted egg yolk lava buns: Be sure to eat these hot!

• Xo spinach dumplings: Made with spinach and XO sauce, they are vegetarian and have a lot of great flavors that I enjoy.

If you want something more substantial, there are also large dishes on the menu. These include fried rice or congee which is a rice soup. The crab congee is amazing if you like crab, and it will definitely fill you up. Other good options include vegetables like Chinese broccoli in oyster sauce or even try the dry chicken wings. Whatever you order, it will most likely be delicious and it is pretty easy to have a vegetarian meal. 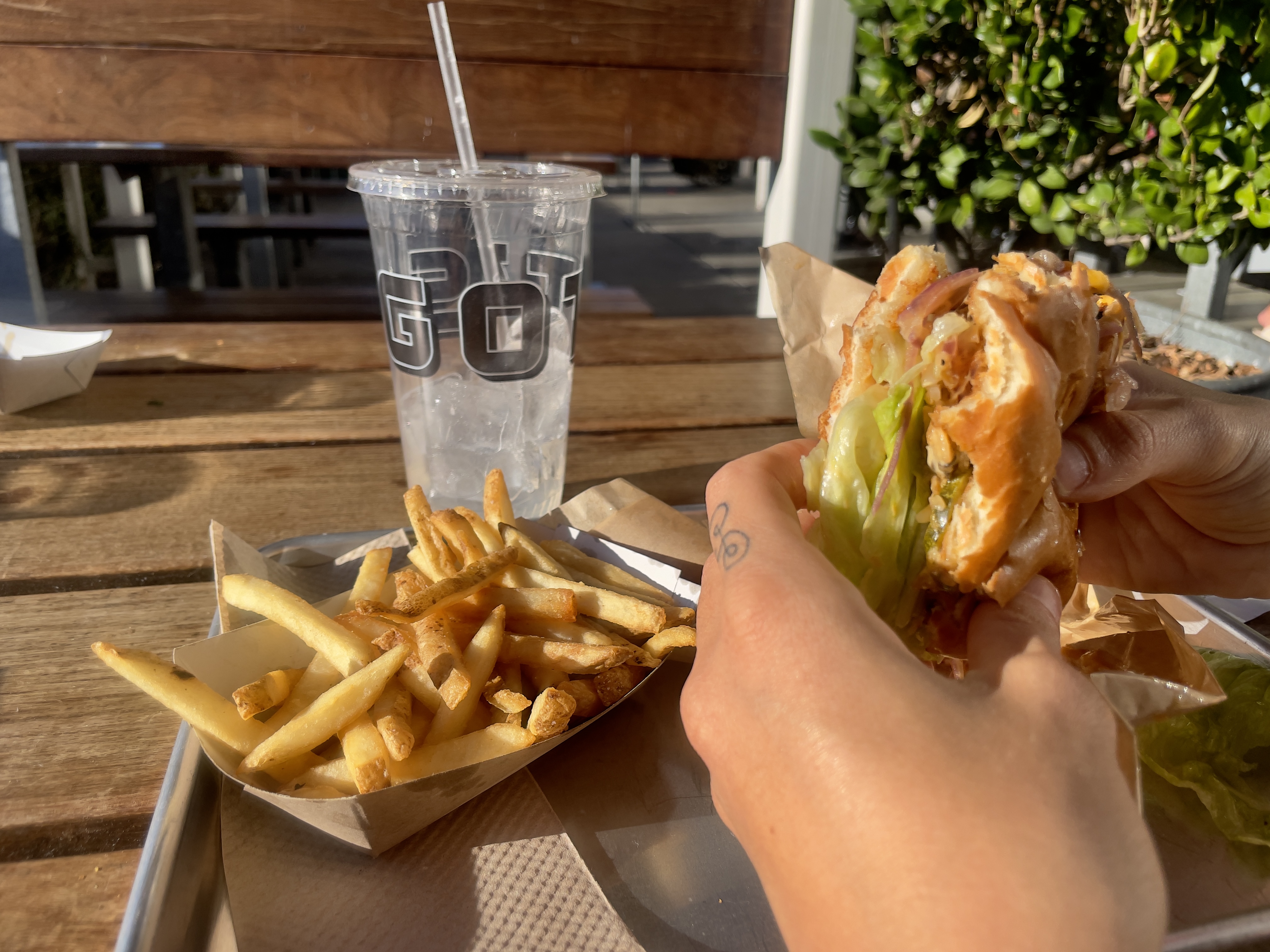 The Elevated All American Diner

Customizable Pizza in the Haight